Wow.What a Weekend I had.

My Lovely Weekend.
It all began with a fantastic competition win on Facebook from the fabulous Ok Magazine .I won 2 tickets too the Gala Screening of Yogi Bear 3D in Leicester square for Sunday 6th January.I was so excited,i have never done anything like that before.The upside was a lovely night away but the downside was there was only 2 tickets so i couldn't take my girls.I decided too book a nice hotel so that me and my partner could make the most of our weekend as we were having too drive 2 1/2 hours too London from Birmingham.So that is what we did.Here is my tickets and letter of confirmation... 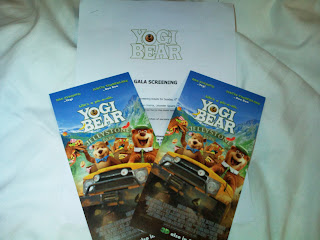 When we arrived at the Vue Cinema in Leicester Square we got too walk the green carpet lol and entered the fun zone.There was so much too do! Face painting,balloon making,badge making,photo's being taken and lots lots more.We had our photo take up against a big blank screen but look how it turned out,it was so much fun. 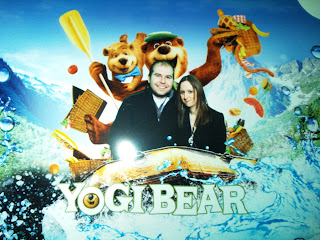 I also had a crazy man do a sketch portrait of me too,wanna see what he drew? I wasn't very impressed by his interpretation of me lol but i have too give it too him,he was a very good drawer.I don't look like this,do i ? Please say i don't.x 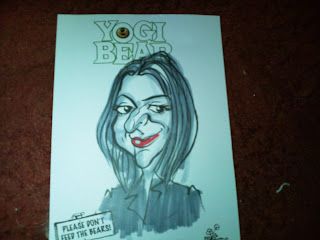 After an hour of fun and games and free feel good juice drinks,snacks and waffles :) We finally went into watch the film.We had a lovely Goody Bag on our seats too which was great,in it there was 2 gold pin Yogi badges,a flashing kids toothbrush,a very large bag of sweet popcorn,a bottle of water,3D glasses and an activity book.I was thrilled and brought these home for my girls.We had 1 each on our seats but there was so many empty seats around us as we were leaving after the film that i decided too take 1 more,waste not want not and all,lol 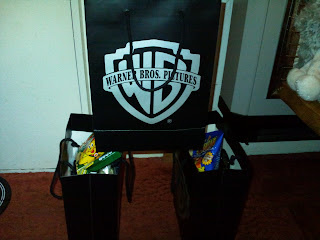 The film itself was very funny,i actually laughed out loud.It was so bright and vivid in 3D,i jumped and ducked too in a few places.I would defiantly recommend taking your children too see Yogi Bear in 3D or 2D when it gets released next Friday as its such a laugh and will be enjoyed by all the family,children and adults alike.So after that very exciting weekend i am now officially pooped and need my own bed.I had such a fantastic time but i won't be entering anymore London based comps for a while,Ive had enough fun too last me a few months i think.How was your weekend?
Posted by Christine Taylor at 14:50