The idea behind this fab teething necklace is from a lady called Jenny McLaughlan from Dundee. She, like most of us mums found that wearing a necklace with a baby was a big no no! She missed wearing necklaces and so one day came up with this brilliant idea,a necklace with a pendant that was safe for her baby too chew and so GUMIGEM was born.
After months of research she settled on a Silicone pendant on a waxed cotton cord that was of medical grade so that it meets FDA standards.
Theses stunning necklaces are now available too buy on line at http://www.laughing-lamb-creations.co.uk/ They retail at £10 and come in a wide variety of designs.
From the day Ryan was born i automatically removed all my necklaces and large earrings knowing full well that one day soon he'd be tugging away at them.It was a shame because i love my gold chains and i missed wearing them. I was a little unsure about the ﻿GUMIGEM teething necklace at first.I kept thinking that my little man is gonna pull on it so hard that it might hurt me but I'm happy too say that i was totally wrong.Ryan was happy too chew on the pendant without really bothering too pull too much on the necklace and even when he did,i hardley even noticed. 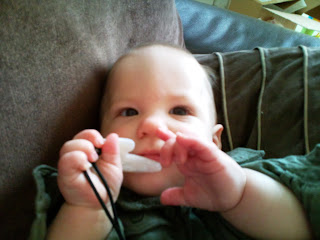 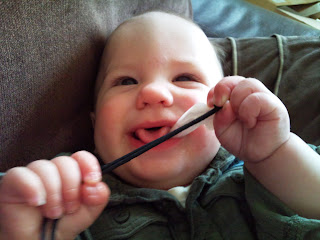 The necklaces are so pretty and come in a nice variety for both boys and girls.Ryan has got the lovely pearl coloured lightning strip pendant.I found that i wore it around my neck when i was carrying him on my hip around the house.He spotted it straight away and into his mouth it went.It's great for when he's grumpily waiting for me too warm his bottles up.Its keeps him happily distracted while i get on with the job in hand where as before I'd have too constantly be reassuring him that his milk was coming.﻿
I found that Ryan loves chewing on it,it's like he enjoys it even more as he thinks it is naughty too be chewing on mummies necklace,lol He even plays with it when I'm not wearing it but i do keep a close eye on him as it does state that you should never leave your child alone with it.He carries it around him in his hand,tugging on the rope and chewing away on his little lightning bolt,its so cute too watch him sometimes,there is he above enjoying himself.

I was given my GUMIGEM teething necklace so that i could write my review,we had fun testing it and will continue too use it for a while too come.I was not paid to write this and both myself and Ryan would suggest that you vist the

Laughing-Lamb-Creations for yourself.Its a new and practical product that could be as useful for you as it is for me.
Posted by Christine Taylor at 07:02