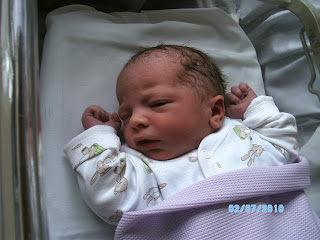 Meeting Ryan made me the happiest mummy in the world,even after all i had been through too get him here.We spent 3 days in the hospital due too my c-section recovery which was hard and painfull but all worth it.
I remember he slept his 1st day away,i just kept looking over at him because he was so tiny compared to my girls who were born weighing 8Lb 7oz's and 8Lb 8oz's.
Feeding was hard too,i'd decided too bottle feed as previous attempts had failed but he wasn't interested really.An few mils of milk every few hours was all the nurses could get him too drink :(
He was so tiny too me ans seemed too stay that way for ages.
I need not have worried tho as he soon filled out and has turned into such a chheky chappy now at the age of almost 6 months.He's such a hungry little boy now and always so happy.He's such a little pleasure too have around.x 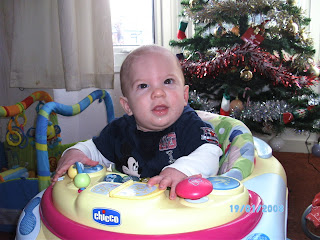 Just look at him now x He's such a lovely little man.He looks so big here in his baby walker.He's loves the lights and sounds,they keep him happy for hours (well not all in one time ) x
Posted by Christine Taylor at 12:30